The purpose of this guide will be to provide a list of existing documentation and a guide to getting started with Managed Cloud with Containers (MCC). The guide is broken down into multiple sections, that are all required in the order they are listed to get started.

There is an assumption that this is for an existing Sitecore solution (however most steps may apply to a new solution as well), that is ran from an existing Source Control Management (SCM) system such as Github, GitLabs, or a separate repository in Azure Devops. This guide provices a general overview of a Sitecore XP transition to Sitecore MCC that does not consist of Containerization.

Adding Containers to Your Solution

In order to get started with Managed Cloud with Containers (MCC), your existing solution needs to be extended to support containers. Sitecore has multiple resources that can assist with getting your solution configured with Docker.

Before you get started with Docker, you'll need to ensure that Docker Desktop is installed and all pre-requisites to run docker locally are in place: Pre-requisite list.

You should also ensure you can run a standard instance of Sitecore with Docker on your local environment, before attempting to customize your existing solution locally Run Your First Docker Instance.

To get started with Docker, you must extend the base Sitecore docker images provided by the public Sitecore Container Registry and extend those images to include customizations from your solution. Below are some basic steps and helpful resources to get started.

It is recommended to use a multi-repository architecture for Managed Cloud, where the Infrastructure and Application repositories will live within the Azure DevOps Managed Cloud environment, while your existing source code will live in an external repository.

Most of the details listed below are also included in this document:

There are often advanced scenarios needed in your images. Custom modules or event existing Sitecore modules that need to be added into the images that you are creating.

It's possible that you'll run into scenarios where you need to patch the configuration or add files to your images based on a specific scenario. Refer to the links below for handling some of these potential scenarios.

Modules should never directly get installed in your existing containers running in production, because not only would you need to install these modules on each environment, but on your next release, your modules would likely disappear. Instead, any files or item changes (Sitecore or 3rd party modules not committed to Source Control) need to be layered onto the images that are being created. By doing this, you ensure everyone or every environment that pulls those images, will have everything that matches everyone elses images.

The Continous Integration (CI) process involves building the solution images that you ran through locally, but on various releases to your Source Control Management (SCM) system. These builds will construct the images intended for your production Sitecore environment, which is likely a different topology than the XM1 or XP0 topology that you ran locally. Below are some common steps that you'll take to modify your solution for you CI process.

The overall process involves building your images with the CI tool of your choice and then using basic authentication to push those images into your Azure Container Registry (ACR) for further use during the Continuous Deployment (CD) process.

The Continous Delivery (CD) pipeline is hosted in the Application repository in MCC and utilizes Ansible to pull the images and release those images to AKS. Once you have successfully pushed your images into your Azure Container Registry (ACR), you'll need to update your ./config/docker-images/docker-images.json.

The Application and Infrastructure repositories in the Managed Cloud with Containers (MCC) Azure Devops environment are both configured to trigger deployments when a change is made to the main branch either directly or via a pull request (however you can also trigger the deployment manually). The best practice would be to create a new feature branch for your latest deployment and in that branch, you'll need to update the configuration to include references to your new custom images in the ACR. This is where you'll need to know the latest build number and branch (or tag version of the latest image in your ACR). 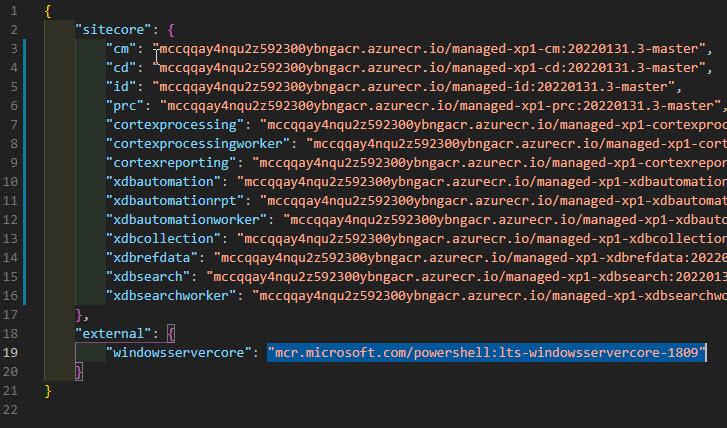 It is important to callout, that in Sitecore 10.2, Sitecore introduced Items as Resources (IAR) for modules, which means that you may not always need to Init MSSQL for a specific module. You should refer to the module references to understand when updates to MSSQL or Solr are required. If you have made changes to the Solr or MSSQL images locally, this likely means you'll need to make the same changes to push these to your MCC environment. Keeping in mind that Solr and MSSQL are not run within containers in a MCC environment.

If you need to configure changes to your infrastructure, you'll need to work with Terraform and the Infrastructure repository, and likely include additional changes to your existing solution images (ie. Adding Horizon for example). Sitecore has provided multiple scenarios and how you would achieve those scenarios listed here: